Cyberbullying Beyond the Playground: Educating Youth about Potential Harms of Communication Technologies 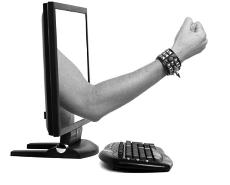 Cyber bullying BY KELSEY A. PRENGER

The Nature of Cyberbullying

Modern communication technologies have come to transform the manner in which relationships are conducted and conversations between people are held. The social structure of our society has been greatly altered or, some may suggest, rudely shaken. No longer do classmates meet after school at the local playground, but rather, they dash home where a computer awaits them. By means of social networking sites, youth can "meet" friends online and discuss a myriad of topics. Though the Internet poses great advantages to the realm of communications, one ought to be wary of several less appealing ramifications. Though the threats posed to one's "cybersafety" can be disguised in various forms, the growing epidemic of cyberbullying is of primary concern in this commentary. High-profile cases have brought this issue to the forefront of both academic and public debate. A solution must be sought; however, the complexity of the predicament complicates any proposal for resolution.

As one definition suggests, "Cyber bullying occurs when a person uses IT to embarrass, harass, intimidate, threaten, or otherwise cause harm to individuals targeted for such abuse" (McQuade, Colt and Meyer, p. 2). In essence, cyberbullying involves the use of digital tools to cause distress on the part of the receiver. The methods by which cyberbullying is accomplished are continually evolving with new communication technologies. The rapid rate of development further complicates a matter of already drastic proportions (McQuade, Colt and Meyer, pp. 63-73). In contrast to traditional forms of bullying, the nature of cyberspace allows for a bully to shield his or her identity and thus act with little regard for potential consequences. Within an instant, a hurtful comment or a degrading photograph can be posted on the Internet for the world at large to access. Once such material has found on outlet on the Internet, its permanence causes added distress on the part of the victim (Shariff, pp. 32-34).

John Cloud, in his article "Bullied to Death," reports on the deaths of four teenagers in connection to instances of cyberbullying in today's troubled, technology-driven society. Rutgers Univeristy student Tyler Clementi committed suicide after his roommate streamed a video depicting Clementi in a sexual encounter with another male. In an instant, an intimate and private action was disbursed online and readily available to the public at large. With the aid of modern communication technologies, this deplorable invasion of privacy reached tragic proportions. I believe that the four cases Cloud presents are sufficient (even if anecdotal) evidence of the appalling reality of cyberbullying among students (Cloud, pp. 60-63).

The Integral Role of Parents
Though social networking sites create a sense of connectivity, the relationships conducted via these streams have the potential to generate great harm. A study by Gustavo S. Mesch indicates that adolescents vary in their willingness to share personal information online. It is determined, however, that most youth lack the ability to determine when one should withhold such information and cease communicating with strangers on the Internet (Mesch, p. 391). Though parents seek to teach their children about relationships and the importance of such values as "trust" and "honesty," our world of ever-emerging communication technologies may cause the need to reevaluate these principles. The question remains: How can parents properly shelter their children from such threats when friends meet on the Internet?

As a response to this question, the Brown University Child & Adolescent Behavior Letter seeks to provide advice to parents on how best to talk to one's child about cyberbullying. It suggests that parents properly establish that the words expressed online are as weighty and meaningful as words expressed in face-to-face conversation. Though open discussion between parents and children is a useful method for cyberbullying prevention, parents must also remember to model appropriate online behavior for their children. Even if parents fail to abide by the guidelines set forth for the household, children should certainly strive to respect such rules and practice proper online behavior ("How to Talk With Your Child About Cyberbullying").

Literature on the subject, such as Bean's Protect Your Child From Bullying, offers advice on how a parent may be able to identify warning signs of cyberbullying. It is suggested that parents be wary if children appear upset, irritable, or emotional after extended periods of computer use.

Above all else, the issue must be addressed in a manner that encourages discussion and allows the child to openly converse about instances of cyberbullying involving themselves or others (Bean, p. 124).

The Influential Role of School Administrators
Among the recommended means for preventing instances of cyberbullying, school administrators and educators are in a position of great influence. In an effort to provide students with a learning environment free of fear, administrators must work to ensure students do not use on-campus technologies to generate harm. Andrew V. Beale and Kimberly R. Hall further prompt school administers in their endeavors and suggest, "Because school administrators must walk a tightrope to protect students affected by cyberbullying without trampling the free speech rights of bullies, school districts should petition state legislatures to add an electronic bullying component to existing state laws that prohibit traditional bullying" (Beale and Hall, p. 10). In a similar manner, Kevin Daly contends that teachers should consider it their "moral obligation" to keep their students out of harm's way and protect children from such online dangers as sexual predators or cyberbullies. To this end, educators and administrators should have a thorough grasp of the nature of cyberbullying and the imminent threats posed by communication technologies.

Educators can also reach out to the community and raise awareness of the prevalence of cyberbullying among students (Daly, p. 44).

The results of one focus group, detailed in Cyber Bullying: Bullying in the Digital Age, indicates that most instances of cyberbullying occur in the home after a child has returned from school (Kowalski, Limber and Agatston, p. 90). In this instance, parents may be the first to learn of an occurrence of cyberbullying. As a result, parents should both inform and seek guidance from schools that may be able to suggest helpful resources. In addition, it is critical to note that in a school environment, educators are not sole figures in a position of influence. Students may first look to their peers for guidance as opposed to educators or administrators. In this manner, student leaders have the ability to prevent cyberbullying by demonstrating proper online behavior for younger students and their peers (Kowalski, Limber and Agatston, pp. 131-138).

Conclusion
Though the responsibility of parents as well as school administrators and educators has been discussed here, it is essential that the youth of today first recognize the importance of the issue. Regulations and lessons in the way of proper online behavior will be disregarded if youth fail to sense the threatening nature of the Internet. Social networking sites and online games are generally perceived as sources of entertainment, not as potential media for cyberbullying.

References
(Dates at the end of items are the dates when the items were retrieved.)

Shariff, Shaheen. Cyber-bullying: Issues and Solutions for the School, the Classroom and the Home. London and New York: Routledge, 2008.

Kelsey Prenger is studying at Baylor University. She may be reached by e-mail at This email address is being protected from spambots. You need JavaScript enabled to view it..