Fighting the Amazon Fires with Misinformation: The Ethics of Celebrity Activists and Environmental Change [CASE STUDY] 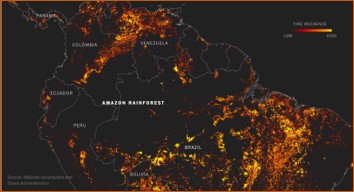 .Many are alarmed by the recent sensationalized news of the Amazon fires in Brazil, demonizing current President Jair Bolsonaro for his destruction of this vital ecological hub (Pecanha et al., 2019). Celebrities are posting and presidents are tweeting: “stop the Amazon fires!” Adding to the social media fires, graphic imagery has the potential to sway perceptions of and provide (mis)information to casual Instagram or Twitter users about the burning Amazon. What they don’t know by looking at these posts, however, is that many may be geographically and factually inaccurate.

“The lungs of the earth are in flames,” exclaims actor Leonardo DiCaprio on his Instagram account to a staggering 35.3 million followers. The striking image he posted, which he frames as a recent photograph of the Amazon, is actually over 20 years old. A self-proclaimed environmentalist, DiCaprio argues these ongoing fires are propagated by one man, President Bolsonaro, and are a direct result of climate change. According to the Washington Post, however, only the forest fringes are on fire, and have been for at least the last decade because of illegal logging and deforestation (Penanha et al., 2019). Humans, not nature, started the fires. Using the age-old technique of slash and burn, economically-motivated farmers are preparing already deforested areas for planting. The high European demand for products like soy drives farmers to burn these forest fringes illegally to expand Brazilian cropland (Symonds, 2019). Brazil’s economy is based on such commodity exports, predominately from agriculture. With Brazilian unemployment at 12%, millions of people are struggling and “the country can ill-afford to back off one of its few thriving sectors” (Pecanha et al., 2019).

While bloggers and other humanitarians are worried about the destruction of the Amazon, some say they neglect the economic issues behind environmental concerns, such as the consumption habits that support illegal deforestation. Meanwhile, more and more people are going to social media for news (Suciu, 2019), finding celebrities like Cristiano Ronaldo, Madonna, and Ellen DeGeneres posting about Bolsonaro’s Brazil. Celebrity engagement can draw vital attention to issues that have long gone unnoticed. However, celebrities rarely study problems in depth, and can scarcely be counted as experts in controversial environmental domains. Many celebrities frame the Amazon forest fires as an environmental catastrophe that is exclusively the result of climate change. Erratic environmental conditions increasing incidences of drought are linked to climate change, and an increase in droughts does lead to more fires; yet the Amazon is not experiencing unusually dry weather (Dunne, 2019). Thus, many say the evidence points to humans as the cause of these fires, and not simply or mostly climate change. The result of this conflict over information and environmental judgment is an angered Brazilian population and a potentially misinformed global social media public.

Ironically, this celebrity focus on the Amazon fires has resulted in increased public interest in both climate justice and land preservation. Despite potential misinformation and oversimplification, the mounting international pressure has led to concrete action in the Amazon. Demonstrators are marching and Europeans are boycotting trade agreements in an effort to effect change in the Amazon and on the global scene (Andreoni et al., 2019). In response, President Bolsonaro has sent an unprecedented number of Brazilian troops to extinguish the fires (Silva de Sousa, 2019). This seems to be a case where fake news, or at least hasty readings of a situation and its causes, are mobilizing the public and contributing to concrete change. Such pressure may be needed for other battles to save the Amazon, since funding for “Brazil’s main environmental agency fell by 20 percent during the first six months of this year” (Symonds 2019).

At the same time, the continued risk of fires on the fringes of the Amazon is not mitigated by simply putting the current blazes out. The expansion of cropland by slash and burn techniques is at least partially a response to foreign demand, and the economic suffering of the farmers pursing this mode of income. As long as the demand for beef and land-intensive crops such as soy stays high, so will the flames. Social media platforms like Instagram and Twitter allow for the instantaneous dissemination of news, well-sourced or not, to billions of people who may be motivated to solve an important problem without addressing, or even knowing, all of its causes. What happens when popular voices on social media help us address a problem that they seem to be misreading?

Suciu, P., “More Americans Are Getting Their News From Social Media.” Forbes, October 11, 2019. Available at: https://www.forbes.com/sites/petersuciu/2019/10/11/more-americans-are-getting-their-news-from-social-media/