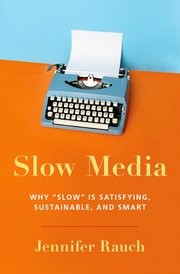 What if some of the most important hidden media ethics issues of our day are being largely eclipsed by some of the most obvious ones? As academics, media professionals, and citizens we constantly express concern about privacy, the limits of free speech, the “fake news” nomenclature, media bias and what I have called “slash, flash, trash, and crash for cash”—the endless increase in mediated violence, tabloid junk, and mega-hyped sensation.

But what if we are missing some of the most substantial issues—those which inform and magnify all the others—issues like media speed and saturation? After all, if media machines, processes, and programming are constantly proliferating and accelerating, would that not automatically multiply and intensify instances of ethics violations and related problems already occurring? What if saturation and acceleration also introduce and magnify yet other problems—including media addiction, irreversible social speed-up, undetected mind control, threats to sustainability, and much more?

Indeed, authors such as Kovach and Rosenstiel have explained in their co-authored books like Warp Speed how media speed-up creates more ethical errors since practitioners have far less time to think through the accuracy of their content and the consequences of their actions. Rushkoff, Turkle, Postman, Meyrowitz, and others have also pointed to the type of mindless, displaced, if not amoral society we approximate when we become screen-obsessed and far less at home with each other and with thoughtful conversation.

Part of the backlash to screen obsession has appeared via “media detox” hotels and week-ends, faculty taking their students on media fasts and diets (see Fast Media, Media Fast) and an upsurge in those interested in the outdoor simple life of camping, boating, and even imitating the Amish, Kogi, and Old Order Mennonites by creating homes with minimal or no media. Many people living in the midst of such an alternative or counter-movement do not perceive it as “backlash” at all but rather as the natural status quo, the desired norm, or as harmony with the natural rhythms of life and thus balanced living.

Thus, it is only natural that a literature should emerge about the value of Thoreau’s and Emerson’s more contemplative life, about what may be learned by indigenous and spiritual societies who practice endless silence, and about the virtues of previous decades and more balanced relationships with media.

Enter Jennifer Rauch and her brand new (Oct. 2018) book with Oxford Press entitled Slow Media: Why Slow is Satisfying, Sustainable, and Smart. At the outset Professor Rauch makes it clear that she is not one of those Neo-Luddites (she uses the term post-Luddites) committed to media bashing. Indeed, she experienced ambivalence both in temporarily fasting from and returning to media culture. So there is nothing extreme in her approach. Indeed, she includes the research of both a U.S. and U.K. survey which affirm that many people aspire to slow down, temper, or take retreats from their media intake. She is hardly alone and her large list of over 300 references suggests that she has many scholarly, artistic, and professional kindred spirits.

Nor is the book pure theory nor abstract ideal. Rauch empirically demonstrates the negative impact of runaway “fast media” not only upon our lives but also upon the environment as in this passage:

E-waste is also a fast-growing concern. . . . Today discarded electronics alone account for over three million tons of trash per year in the U.S. and around 35 million tons worldwide. (p. 3)

There are many such convincing passages, each well documented within the scholar’s treasure trove of over 460 notes!

But the book does not focus upon the negative. It provides many positive passages supporting the value of slow-down. Many slow-down benefits are intuitive just as within the slow food movement when we actually taste our food and better nourish ourselves when we take our time. But other benefits include tangible examples of media we may not have encountered such as a publication which only prints news after the authors have had weeks to consider the accuracy, multiple perspectives, and analysis of the initial reports. Rauch introduces the readers to a wide variety of such “alternative” and thought-driven media.

As with Turkle and others, Rauch traces her values back far beyond the electronic age to the much simpler, self-reliant Transcendentalist umwelt of Emerson, Whitman, and especially Thoreau. The values of contemplation, nature, simplicity, and independent perspective are re-affirmed. But none of the recent contemplative books, of which hers is the most recent, are merely repackaged Thoreau. A lot of fresh critical insight is introduced in Slow Media such that original thinking (unlike formulaic fast media “thinking”) is not only championed but also demonstrated.

Areas pertinent to ethics are spelled out not only regarding an environmental ethic, and the overall ethics of speed, but also in specific ways such as how to support “slow journalism.” As Rauch explains:

The Slow Journalism movement could benefit from borrowing the GCF (Good/Clean/Fair—ed.) motto. An early proponent of this perspective was scholar Harold Gess. He envisions good journalism as . . . committed to the well-being of its community; clean as treating sources ethically pursuing social justice, and supporting sustainable eco-systems and livelihoods; and fair as making media as accessible to the community and ensuring non-exploitative working conditions. (p. 39)

It is fair to say that speed-up and size impact both the micro-ethics pertaining to the multiple momentary decisions made by individual media professionals and consumers and to the macro-ethics involved in whether “truth” and the earth itself can be saved.

Slow Media also invites contemplation of many other related topics such as green media and what Rauch calls “media mindfulness,” the process by which we make conscious choices about which media we consume and produce rather than working mindlessly out of routine, addiction, or habituation. And there is far more food for thought throughout Rauch’s volume including a careful comparison of the slow food movement itself to slow media.

Virtually all publications have areas where there could be improvement and this is no exception. One could point out some key sources which are missing, unacknowledged, or under-reported. Given that the author has so much to say one might also lament that the primary text (without pre- and post-materials) is only 135+ pages. Indeed, there are many “hit-and-run” passages which beg for longer explanation.

Yet these are smaller matters in a book which is larger in its importance. So they read like a “minus” behind a giant “A” on a rich, densely-packed thesis or term paper. This is a book to read, distribute, adopt for classes, and publicize.

For while “slow media” might seem like a fringe fad worthy of little attention, a closer look at the book shows that it fosters X-ray vision into some of the deeper patterns of both our social denouement and positive possibilities.

Although the pell-mell status quo may argue that “small” and “slow” newtopian visions are quixotic nostalgia at the extreme, clearly Rauch has made clear that it is our own fast media and Western society which now live at the extreme . . . and which exemplify excess.

It is time to restore the balance. Read this book.