On Normalizing a Nazi 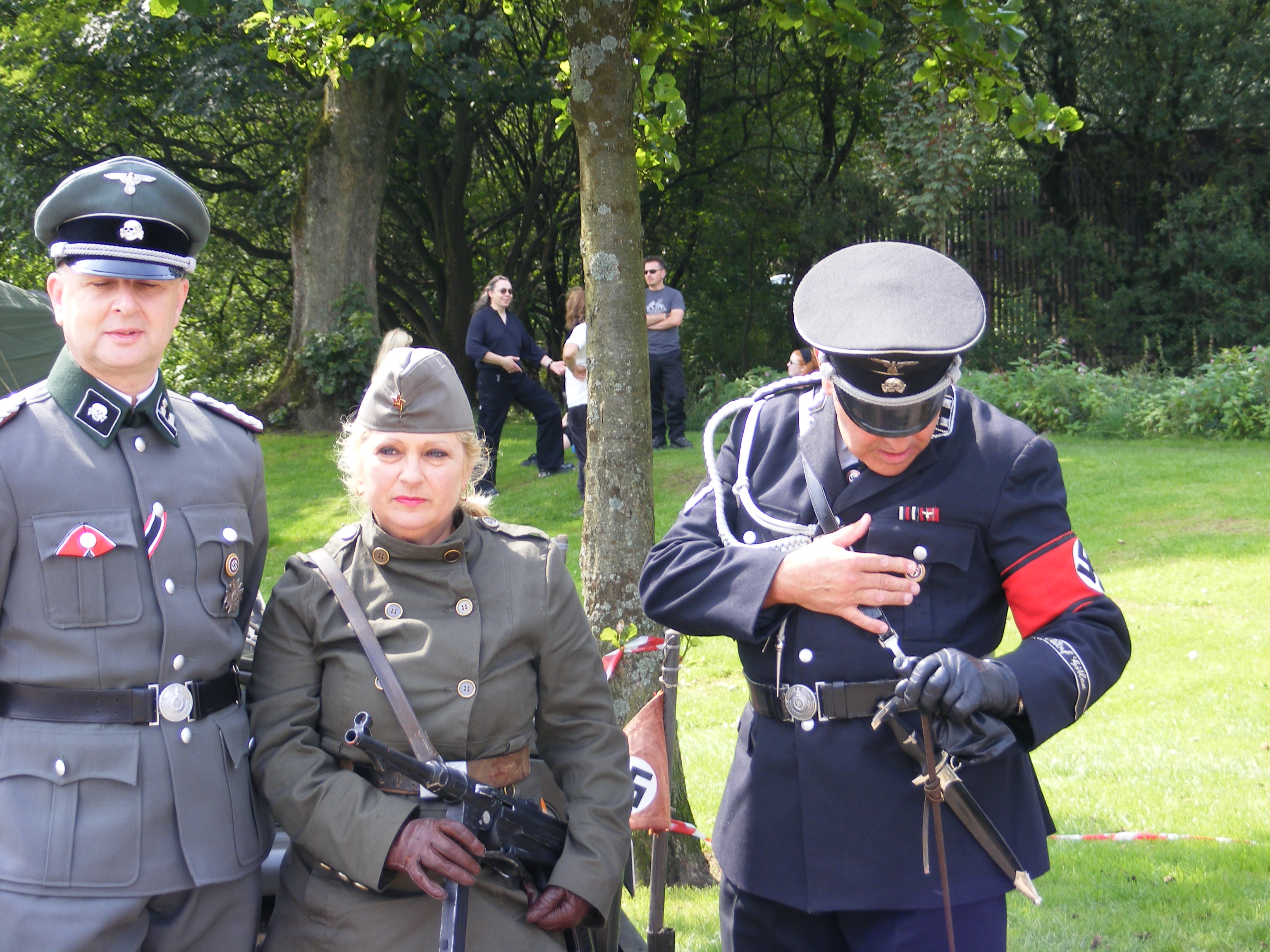 In 1987, two years into my first newspaper job in Sonora, California, Huey Newton, the Black Panther leader, arrived at the local prison to serve a 16-month term for firearms possession by an ex-felon. My thought process at the time didn’t go much beyond, “Hey, the guy’s a celebrity, we should profile him”—meaning, of course, that I should profile him.

Some readers were unhappy with my story. Why, they asked, was a thug being glorified on the front page of their local paper? A man named Frank Smart later recalled that in 1968, “when Mr. Newton was inciting his people to ‘Burn, baby, burn,’ I was in Vietnam serving my country honorably and getting shot at daily”1 Smart wrote that his disgust at my story in the (Sonora) Union Democrat—“three columns wide with photographs”—inspired him to found a local chapter of Vietnam Veterans of America.2

I don’t recall that my story glorified Huey Newton.3 Newton was handsome, intellectually nimble and, at times, charming, and I said as much in my profile. He was also confrontational at times, touchingly keen to impress me with his erudition—he earned a Ph.D. in the History of Consciousness from UC Santa Cruz4—and had an extensive criminal record, and I wrote about all that. The takeaway, I thought, was that this is a complicated, interesting person.

While some of our unhappy customers doubtless thought any positive words about Newton were too many, others, I suspect, were offended that we wrote about him at all. To their way of thinking, news coverage per se glorifies those whom it spotlights. Why call attention to someone who should be ignored? Why help him disseminate his repugnant ideas?5 Zero-sum thinking also seems to be at play: When we devote resources—staff time and news hole—to Story X, we neglect potential Stories Y and Z.

I recalled the complaints about my Huey Newton3 piece this past November when I read the story in The New York Times Magazine that has come to be known as “The Nazi Next Door.”6 Richard Fausset’s story profiled Tony Hovater, a welder from an Ohio suburb whose “Midwestern manners would please anyone’s mother”—and who calls himself a white nationalist. The article refers to Hovater as a bigot and a fascist activist and quotes a local politician who describes Hovater’s views as “horrible and repugnant and hate-filled.”

Nevertheless, the story outraged Times readers for some of the same reasons my Huey Newton profile offended readers of my little paper in Northern California years earlier. The Times responded to the uproar in three ways: In a note by national editor Marc Lacey,7 in a follow-up note by Fausset8 and in a headnote appended to the online version of the profile that acknowledges that the article “has drawn significant feedback, most of it sharply critical,” and provides links to Lacey’s and Fausset’s columns.9

Critics thought Fausset had “normalized” Hovater by describing his entirely ordinary activities and interests. Lacey contends that the point of the story was to show that the “normalcy” of Hovater’s life masks his extremist views or makes them seem unobjectionable to the people around him. Essentially, Lacey’s argument is that unhappy readers are blaming the messenger. It’s not The Times that is normalizing a Nazi, but the times.

Lacey also cites readers who thought The Times should have profiled victims of white supremacy, like the mother of Heather Heyer, the woman killed by a white nationalist who came to Charlottesville, Virginia, last August to join a protest against the removal of a statue of Confederate general Robert E. Lee—again, a kind of either/or thinking that doesn’t allow for the possibility that The Times could profile some of the “very fine” and not so very fine people “on both sides,” to borrow President Trump’s response to Charlottesville.10

Finally, Lacey invokes the time-honored journalistic trope of shining a light “into the most extreme corners of American life and the people who inhabit them.” The idea there is that Hovater and his ilk are lurking in those dark corners, whether we choose to acknowledge their presence or not, and that the first step toward combating hateful ideologies is learning where and among whom they are to be found. The counter-argument, of course, is that the journalistic searchlight functions as a spotlight, giving such unsavory characters the attention they crave and the platform they need to draw converts to their cause.11

In his long note, meanwhile, Fausset acknowledges that he was unable to find out what he most wanted to know about Hovater: how he came by his beliefs. Lacking the answer to that question, the profile never goes beyond its subject’s ordinariness. Though neither Fausset nor Lacey says so in so many words, that ordinariness became the point of the piece: The Nazi next door, like the Nazi who worked in the concentration camp, isn’t a wild-eyed ogre but a mild-mannered guy who watches Seinfeld, listens to National Public Radio and is hoping to get a muffin pan and a pineapple slicer as wedding gifts. And the election of Donald Trump, as the profile notes in passing, “helped open a space for people like him.”

Controversies over stories like “the Nazi next door” usually take the form of a debate about whether the story should or should not have been done. A better set of questions, though, addresses how such stories should be done—questions of placement, proportion and frequency.

Journalists are correct in assuming that many members of the public are interested in knowing “what makes a man start fires,” as Fausset puts it, quoting a song by the Minutemen. But critics of news coverage of mass shootings typically want news organizations to pay less attention to the shooter and more attention to the victims and their families. Critics of coverage of the Virginia Tech massacre in 2007 were furious to see photos of the shooter, Seung-Hui Cho, emblazoned on the front pages of newspapers. Even if it cannot be proven that such high-profile coverage inspires copycat crimes, many people have misgivings about rewarding bad behavior with media attention.

So how might The Times have avoided the problem it created for itself? Instead of taking the microcosm approach, whereby one white nationalist is made to stand for the thousands of such twisted souls in cities and towns across the land, the magazine could have made the Hovater profile part of a package of stories, much as The New Yorker did before the 2016 election when it published a number of mini-profiles of young voters from across the political spectrum.12 Several profiles of men—and women—like Hovater from a range of locations and backgrounds might have made a more convincing and alarming case that the lunatic fringe is not quite as marginal as we would like to believe.

Or, as some of its critics suggested, The Times could have done profiles of the targets of white nationalism—not instead of the profile of Hovater, but in addition to it, in conversation with it, as it were. For that matter, arranging an actual conversation between Hovater and an ideological opponent might have made for some compelling reading. Alternatively, if Hovater is representative of the growing number of white nationalists in America, his next-door neighbors represent the rest of us who find white nationalism abhorrent. Perhaps Fausset should have talked to the anti-Nazis next door.

The value of any of these approaches is that they address the problem of readers viewing each story in isolation rather than in the context of the paper’s ongoing coverage of an issue. The Times may have already done the kinds of stories its detractors thought it should have done instead of the Hovater profile. It may do such stories in the future. But unless those stories are juxtaposed, readers are going to complain that the paper has highlighted this while ignoring that.

2 If my story did indeed play a role in the founding of the local VVA chapter, I’m glad I wrote it.

3 The story, written before the age of electronic archiving, is deeply buried in a paper file somewhere in my office.

4 I was offered admission to the same program a couple of years after Newton but wound up taking my academic business elsewhere.

5 Such questions were raised in 1995 when The New York Times and the Washington Post were debating whether to publish the Unabomber’s manifesto at the behest of the FBI, which hoped publication would lead to the Unabomber’s arrest, which in fact it did.

8 Fausset, Richard. (2017). “I Interviewed a White Nationalist and Fascist. What Was I Left With?” The New York Times. November 25. https://www.nytimes.com/2017/11/25/insider/white-nationalist-interview-questions.html

9 Some readers, dissatisfied with all these responses, argued that the Hovater affair was exactly why The Times erred when it eliminated its public editor position the previous spring.

11 At this writing, however, the only obvious harm caused by the Hovater profile has been to Hovater himself: The Washington Post reported that after the publication of the Times story he was fired from his job and would soon have to move out of his house. (Phillips, Kristine. [2017]. “Nazi Sympathizer profiled by the New York Times says he lost his job and—soon—his home.” Washington Post. November 30. https://www.washingtonpost.com/news/post-nation/wp/2017/11/29/nazi-sympathizer-profiled-by-the-new-york-times-says-he-lost-his-job-and-soon-his-home/?utm_term=.a445ad2e7d7b.