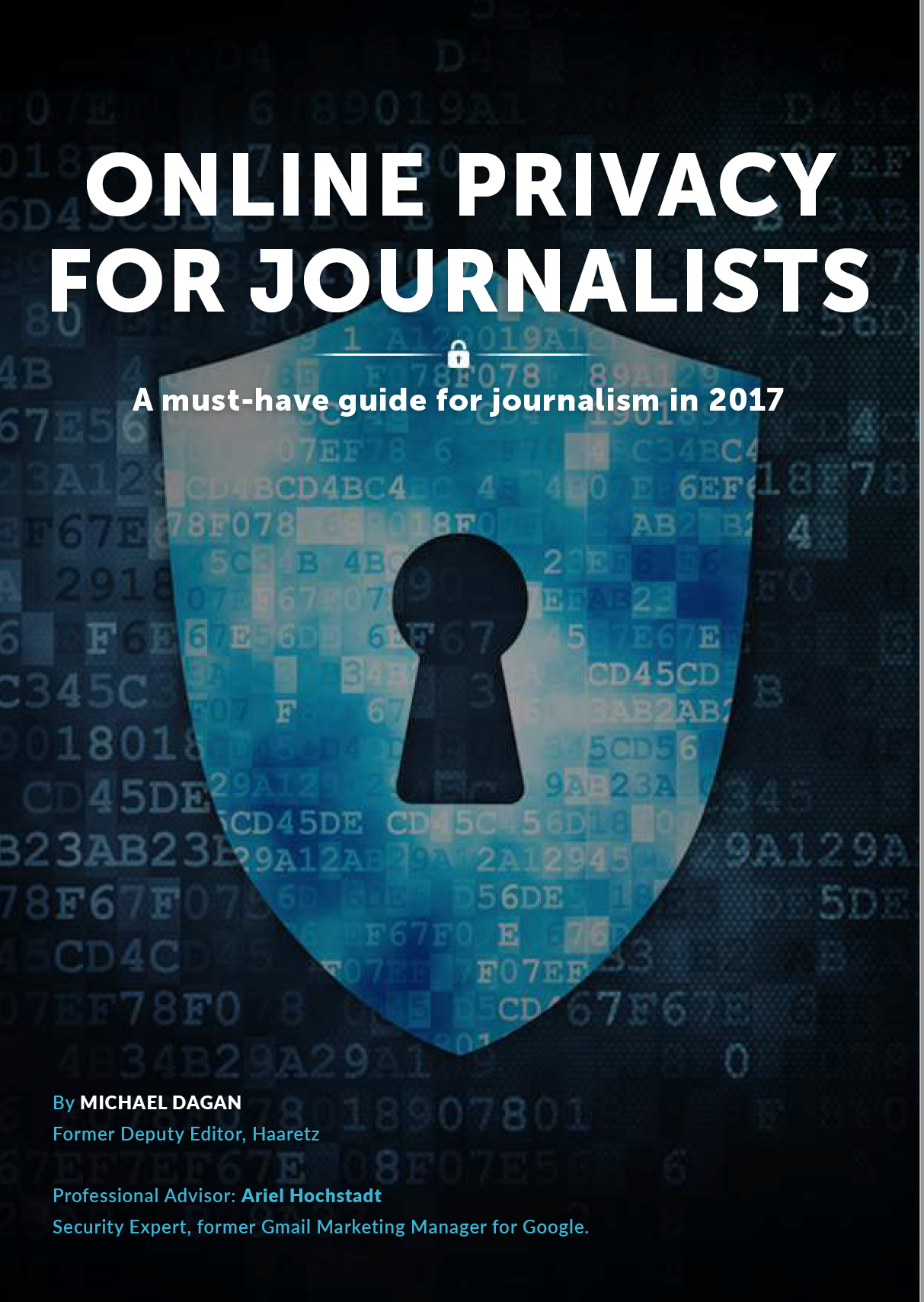 {NOTE: The original pamphlet from which this article was drawn—Online Privacy for Journalists: A Must-Have Guide for Journalists in 2017—contained a number of specific recommendations for the use of existing computer programs, as well as links to various “white papers” on the topic. Because new or updated programs are always being prepared by a variety of organizations and individuals, and because many of Media Ethics’ readers are interested in the parameters and philosophies of such programs rather than needing to use them professionally, and also because it is easy for a semi-annual publication such as this one to go out of date quickly, many of these detailed recommendations have been omitted from this edition. If this article is being used “for real” it is urged that the user obtain an up-to-date version from the author, who can be reached at the addresses in the “author’s bio” at the foot of this article. Other expert sources—such as Micah Lee—and references may be reached through the author. Other material, such as some “tips” from Edward Snowden, a description of the Rosen case—which shows the lengths to which a government may go, and a discussion of anti-malware, antivirus and firewall software is also available from Michael Dagan.}

An air of danger to freedom of speech and freedom of the press is spreading slowly, like a dark cloud, over the Western Hemisphere, raising old fears.

When a serving American president accuses his predecessor of surveillance; when he prevents major U. S. media outlets access—previously always granted and usually taken for granted—to news conferences he holds; and when he incessantly accuses the media of being the country’s number one enemy, it isn’t surprising that memories of disgraced President Nixon surface up more with every self-pitying tweet about Saturday Night Live’s satire, and that even some Republican Senators (such as John McCain) express fear for the future of democracy.

And McCain is not alone. Many journalists with whom I have spoken recently expressed concern for whatever lays ahead for the freedom of the press. At a time when it’s possible to express the following statement—“Donald Trump controls the NSA”—and not be a liar, anything’s possible. Add that to the fact that recent news about the National Security Agency should have taught us that almost all encryption systems can be compromised, if someone has the perseverance and computer power to crack them—and then you are en route to envisioning an utterly Dystopian world, where you cannot even get too comfortable laying on a sofa in front of your own smart TV.

The good news is that it is nevertheless possible to make it difficult for anyone to try and intercept your e-mails, the text messages you’re sending, or your voice phone calls.

So, you can take measures to make much harder the lives of those who want to uncover your sources and the information being revealed to you. Of course, the degree of effort you’re prepared to take to protect your privacy, your sources’ anonymity and your data’s safety, should be commensurate to the likelihood of a real threat, be that hacking or spying.

“The old-fashioned promises—I’m not going to reveal my source’s identity or give up my notes—are kind of empty if you’re not taking steps to protect your information digitally,” says Barton Gellman of The Washington Post, whose source, former NSA contractor Edward Snowden, helped uncover the scope of NSA’s and Britain’s GCHQ’s operations, to his interviewer Tony Loci. Loci herself, who covered the American judicial system for AP, The Washington Post and USA Today, and was herself held in contempt of court for refusing to identify sources, would probably endorse Gellman’s opinion. A list of when NSA obtained access to your e-mail, video or voice chat, videos, photos, stored data, VoIP calls, file transfers or video conferencing is available—starting with Microsoft/Hotmail in 2007 and continuing through YouTube, Facebook, Skype, Apple and others. (A list of when each service became tied to the NSA is available.)

So, what needs to be done to ensure that a journalist’s sources and data are secure? Grosso modo, the following tips on “what can be done” can be useful for that purpose.

COMMUNICATING WITH YOUR SOURCE AND SAFEGUARDING SENSITIVE DATA

Let's begin by listing what you can do when it comes to communicating with a source, and storing any sensitive information obtained that way:

What can be done? You should use a secure call service, such as the one possessed by the Signal app—which has been tested repeatedly for security. Although this may mean that both the source and the editor need to download the same app, the process takes just a few minutes. However you choose to communicate with your source, do not bring your mobile phone to sensitive meetings. Buy a disposable device and find a way to convey its number to the source privately, in advance. The source needs to have a disposable safe device as well. Authorities can track your movement through cellular network signals and it’s advised to make it harder on them to locate you retroactively in (for example) the exact same cafe where the source was sitting. If you fail to follow this rule, all local authorities will be required to do is ask (politely and legally) for the video recorded by the cafe's security camera at the time of your meeting.

Two final notes on texting: First, a cyber security expert I’ve discussed this with says you should always have a working hypothesis that text may be encrypted but the fact that these specific two individuals are talking, at this present time, might not go unnoticed. Second, you should also remember to delete the messages in your phone (although this may not be enough to withstand a forensic check), just in case your device falls into the wrong hands.

In an interview with Alastair Reid at journalism.co.uk, Arjen Kamphuis, an information security expert, recommended that for encrypted hard drives, secure e-mail, and unlocking laptops, one should choose a password of more than 20 characters. Of course, the longer the password, the harder it is to crack—but the harder it is to remember, too. That’s why he recommends the use of a passphrase. “It can be anything, like a line of your favorite poetry,” Kamphuis says, “maybe a line from something you wrote when you were nine that no one else will know about.”

Reid reports this thought-provoking calculation, using the Gibson Research Corporation’s password strength calculator: A password like “F53r2GZlYT97uWB0DDQGZn3j2e” from a random password generator, seems very strong, and indeed it is, taking 100 sextillion centuries (23 zeros) to exhaust all the combinations even when the software is making one hundred trillion guesses per second. But the phrase “I wandered lonely as a cloud,” is so much easier to remember and is also more secure, taking the same software 3.40 nontillion centuries (30 zeros) to exhaust all possibilities.

Or, use cloud services that automate encryption before uploading files, and sync everything with local versions. The provider might have the decryption key, but data risk is not as high as is the case with other cloud providers.

Cloudless Syncing with BitTorrent Sync is not a true cloud-based service, and cannot be used to store data for long periods of time, but it is free, and designed to be a replacement for Dropbox.

HOW TO BECOME ANONYMOUS ONLINE

Beyond securing communications with your source, and protecting possible breaches of the sensitive data you obtain, you should also avoid being tracked while browsing. Online habits can disclose or provide hints as to the story you're working on, or worse, hint or disclose the identity of your source. Here are some golden rules for surfing the net safely:

Another option related to Tor is to download Whonix, a secure operating system that is focused on privacy. It works as an access gate to Tor, and only allows connections with Tor sites and users. But the most popular Tor OS is Tails (The Amnesiac Incognito Live System). Tails can be booted from a USB stick or DVD, and it anonymizes all information. Edward Snowden is considered a fan of this software and a list of his “tips” is available. Qubes is another OS that supports Whonix and is recommended by Snowden.

A truly safe VPN needs to be provided by a company that’s not located in one of the “14 Eyes” countries, where intelligence networks have agreed to collect and share information with one another. The USA belongs to this system—so VPN companies located in the former Soviet Union have an advantage. Their courts do not easily hand out orders to retrieve information collected by local companies, be it regarding their citizens or foreign nationals. By the way, even if governments are on the hunt for traffic that is sheltered by a VPN, you can still use stealth VPNs like TorGuard to confront such a challenge, whether it is active government censorship or just run-of-the-mill spying.

The problem with maintaining the confidentiality of e-mails is even tougher: Google and Microsoft will most likely just give out your e-mails to government agencies if and when required by the courts to do so. What should you do?

As Reid pointed out in his interview with Kamphuis on journalism.co.uk, Glenn Greenwald almost lost the NSA story because he initially ignored Snowden’s instructions on e-mail encryption. In other words, if you want a story that will go down in history it makes sense to be secure.

Kamphuis agrees that PGP can be trusted. As he and Reid explain, with PGP encryption, you have a public key, like your public phone number, and a private key. The public key can go on Twitter biographies, business cards, websites and wherever else your work is publicized, but the private key must be stored securely, as with any other sensitive information. Then, when a source wants to send information, they will use your public key to encrypt their e-mail, that only your private key can unlock.

Kamphuis recommended the GNU Privacy Guard, an open-source version of PGP, that is simple to set up and has an active support community. For encrypting files, data and hard drives, he suggested consulting his free eBook, Information Security for Journalists published with Silkie Carlo and released through the Centre for Investigative Journalism (CIJ), which fully explains the process. If you do choose to encrypt the message itself regardless of your mail provider’s identity, using zip with a password is a good idea, and 7ZIP is a recommended tool for accomplishing that.

And one last word on e-mail encryption: One of the real problems to bear in mind is that even after encrypting a message, not everything is encrypted. The e-mail addresses of the sender and recipient, the subject line and the time and date when the e-mail was sent, are all out in the open.

As Micah Lee put it when interviewed about privacy in Wired: “If your computer gets hacked, the game is over. Creating a virtual sandbox around your online communications is a good way to keep the rest of your system protected. Tor is awesome and can make you anonymous. But if your endpoint gets compromised, your anonymity is compromised too. If you really need to be anonymous, you also need to be really secure.”

And journalist Tony Loci puts it in even harsher words in an article published in an eBook about the future of crossborder investigative journalism for the Nieman Foundation at Harvard: “Some journalists, computer scientists and privacy advocates are so alarmed that they recommend reporters go old school ... and rely on in-person interviews and snail mail.”