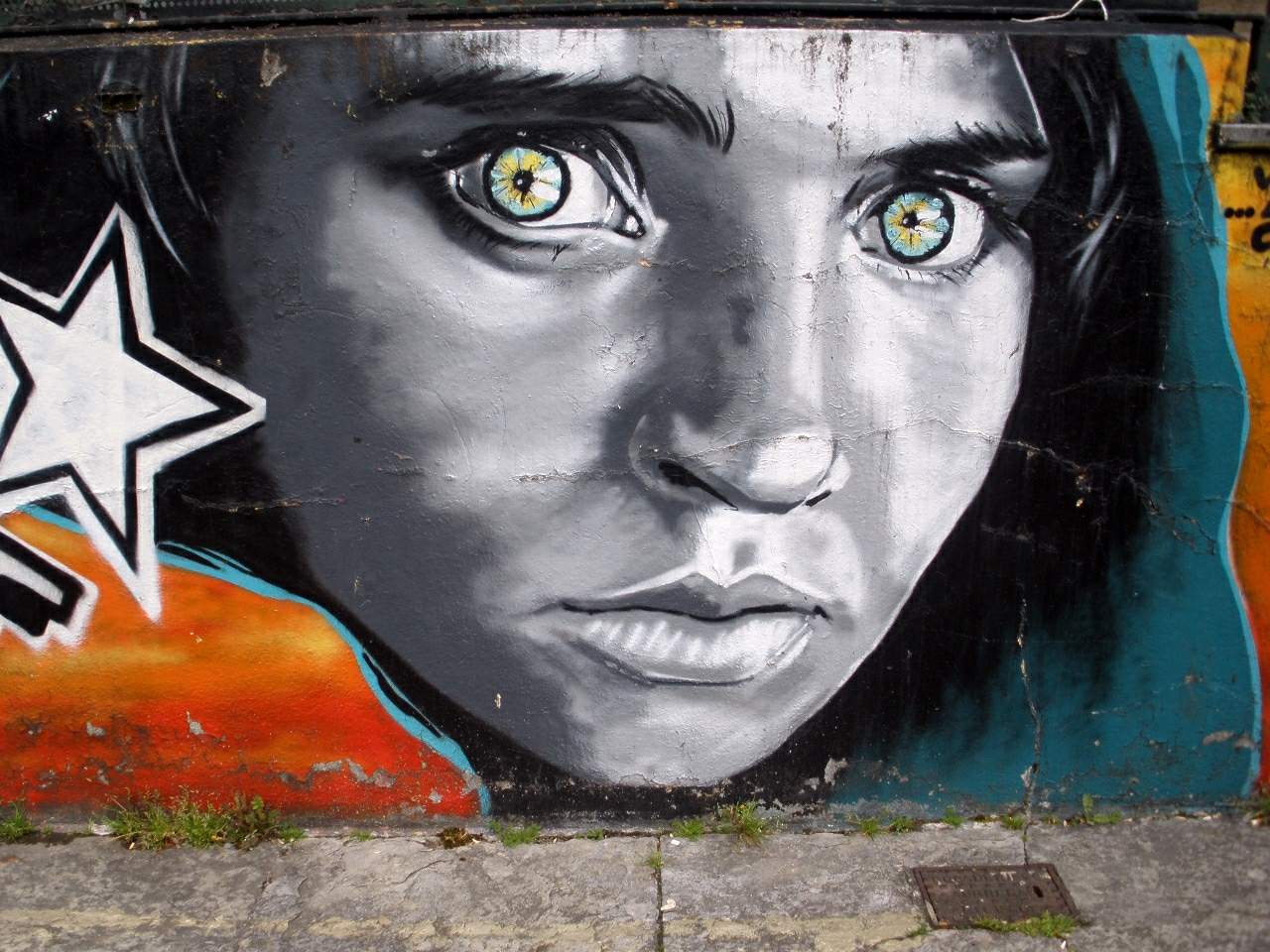 A small boy in a dirty Spider-Man shirt, tears streaming down his face, puts a toy gun to his head.

A smiling man carries a sewing machine through floodwaters that come up to his chin.

These were some of the images that leaped out at me from a recent exhibition of the work of photographer Steve McCurry at Penn State University’s Palmer Museum of Art.

McCurry is best known for a riveting portrait of a green-eyed Afghan girl—later identified as Sharbat Gula—that appeared on the cover of National Geographic in 1985. That image, along with another portrait of Gula that McCurry made 17 years later, was also part of the exhibition.

McCurry’s photographs are gorgeous. Maybe too much so. Teju Cole, writing in The New York Times Magazine last spring, accused McCurry of feeding the Western appetite for romanticized images of the Third World.

It’s an old argument. George Orwell made it in an essay titled “Marrakech,” published in 1939.

To an Englishman, Orwell writes, Morocco means “camels, castles, palm-trees, Foreign Legionnaires, brass trays and bandits. One could probably live here for years without noticing that for nine-tenths of the people the reality of life is an endless, back-breaking struggle to wring a little food out of an eroded soil.”

Cole wasn’t claiming that McCurry supplied the toy gun or the turbans. Nor was he saying that McCurry coaxed the child to point the gun at his head, or the sewing machine owner to say “cheese” as he waded through the flood.

Individually, Cole wrote, each of McCurry’s images may be a true depiction of life in contemporary India, Afghanistan, Nepal or wherever. Collectively, though, they falsify contemporary reality in these places by ignoring “laptops, wireless printers, escalators” and such-like trappings of modernity.

Cole was commenting specifically on McCurry’s 2015 book India, which I haven’t seen. But among the images at the Penn State show were young monks in orange robes and white running shoes, and younger monks in red robes who are using handheld electronics. Indeed, such juxtapositions of the traditional and the modern are themselves photographic and journalistic clichés.

Lurking behind Cole’s anti-colonial critique are larger doubts about documentary photography. Strictly speaking, so the argument runs, all photos are partial, aestheticized versions of reality. They show only what the photographer chose to include in the frame. They show only the people and places the photographer ran across at a particular moment. They are inherently decontextualized.

The honest documentary photographer concedes the point and makes a good-faith effort to compose images that are representative of a local reality. Part of that good-faith effort is a promise not to arrange a scene or pose a subject or use digital technology to add or subtract from the image after it has been shot.

Alas, only days after Teju Cole’s critique appeared in The Times, a visitor to a gallery show of McCurry’s work in Italy noticed a photo that had been carelessly, blatantly photoshopped: The bottom of a road sign appears where a man’s leg should be, creating a peg-leg effect. The entire sign seems to have floated off to the right. Busted!

McCurry has apologized, sort of. He blamed an underling for the leg/sign screw-up, while acknowledging that the ultimate responsibility is his. But he also claims that he’s now a “visual storyteller” rather than a photojournalist, the implication being that his more recent work should not be held to the same ethical standards that govern the work of news photographers.

This argument is almost identical to one that storyteller Mike Daisey made in his own defense when a purportedly true story he told about conditions in Apple’s manufacturing plants in China in 2012 turned out to have some fictitious elements.