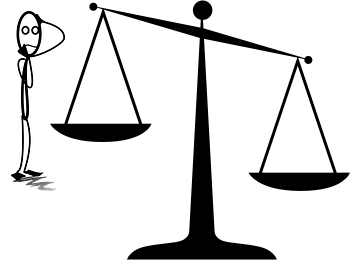 stickmanScalesSince the 1920s journalists in the United States have been writing and rewriting codes of ethics. This began because they wanted the public and their own employers to regard them as worthy of respect (and decent pay), with rules, specialized expertise, and lofty purpose—genuine professionals, just like dentists and accountants. They also wanted guidelines that would keep them both honest and out of court.

There are quite a lot of codes around: The broadcast journalists (RTDNA) have one; a good many news organizations, from tiny newspapers to major market TV stations, have their own; the Online News Association is even hosting a participatory hacking party to encourage members to draw up their own codes, “because one size does not fit all.”

Most recently, just after Labor Day the Society of Professional Journalists (SPJ) released a revision of its 1996 code, probably the most influential among and most widely consulted by U. S. journalists.

Codes typically have many problems because they fill conflicting needs. The ones written by news outlets are often no more than employee manuals, and pronounce on confidential sources alongside overtime and severance. The deft touch of in-house lawyers is apparent, and the codes give management both deniability if reporters mess up and the moral license to nail them even if their misdeeds are more embarrassing than unethical.

But the bigger problem of codes is that they are so clearly overmatched by the swirl of ethical challenge that inundates contemporary journalism.

To be sure, right conduct can be encouraged by admonitions such as “seek the truth,” “don’t plagiarize,” “correct errors,” “don’t shill,” and “treat people with respect.”

But like the Ten Commandments and the Golden Rule, those instructions constantly clash with each other and with real-world pressures. Today’s journalists—and their employers—face challenges that are immensely more perplexing than those that these codes anticipate, let alone address. Take these hot-button issues the SPJ code does almost nothing to clarify:

Journalists will continue to wrangle over what they should do in the face of those problems. The codes I’ve looked at aren’t much help, but they reflect an enduring wish to do the right thing, which remains something that deserves respect.