What the Media Taught Me about Ethics 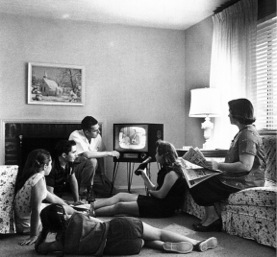 2EvertFBaumgardnerI was asked recently to give a presentation on “Learning in the 21st Century.” But I have to admit the 21st Century continues to bewilder me. Since the symposium organizers were hoping for something on cyber-turboed media-directed, enhanced, supported, driven, flipped, MOOCed, gamed, or some other buzzword style of learning, I started thinking: how, and what, did we learn in the 20th century? What did the media teach me about life and all its myriad ethical dimensions?

We leading edge baby-boomers, born in the decades right after World War II, shifted our label from the “television generation” to the “sex, drugs & rock ‘n’ roll generation,” to social activists, to mildly complacent 401K’s. In our earlier years we were enveloped in every communication medium that some group—from the Legion of Decency to Congress—said would steal our souls, destroy our minds, and turn us into juvenile delinquents.

The messages from our media immersion, however, were decidedly more benign. Television taught us from Romper Room’s “Do Be a DoBee, Don’t Be a Don’t Bee,” to the living rooms of Father Knows Best and Leave It To Beaver that family is the center of society, and to the squad rooms of Dragnet and Highway Patrol, that crime doesn’t pay. Some of those societal values stuck, but others—like, police are nice…if you are; government and business are fundamentally honest; Russians and Chinese are fundamentally evil—faced challenges not only from an awakening press, but from the inherent subversity of science fiction and the tribal back-beat of rock ‘n’ roll.

The media that would make us juvenile delinquents actually turned us into something far more dangerous—responsible and free thinkers. Early rock & pop was actually a lesson in virtue, instructing us to be respectful, especially of women. We should only take out our ire on those who weren’t, like that Bird Dog Johnny (who also “kissed the teacher…he’s the teacher’s pet now,” foreshadowing the tabloid scrums with the Mary Kay Letourneau(s) of education). The Everly Brothers worried about (Wake Up) Little Susie’s reputation for an innocent staying out all night. Even wicked-hipped Elvis, who forever revolutionized stage performance and urged us to open self-expression, and was the embodiment of sex and rock ‘n’ roll (and unfortunately later—drugs) wanted nothing more than a (Love Me) Tender and sweet romance. There were some drawbacks to true love, however. One important lesson seared in my brain: teenagers and fast cars (Tell Laura I Love Her, Dead Man’s Curve), and especially railroad tracks (Teen Angel) are never a good mix.

The early discontent with parents, bosses, and other adults (Yackety Yack, Get a Job, Summertime Blues) grew into far more powerful statements of personal potential, independence, and responsibility (Won’t Get Fooled Again, For What It’s Worth, Something in the Air, Ohio—“How can you run when you know?”). They gave us 3-chord progressions of virtue and duty ethics, consequentialism, and social justice. Bob Dylan chronicled the times that were a-changing (“Get out of the way if you can’t lend a hand”): race-based social injustice from (The Lonesome Death of) Hattie Carroll to Hurricane (Carter), and the prescient pre-Watergate “…even the president of the United States sometimes must have to stand naked.”

Science fiction became another favorite medium to challenge the projected image of a wholesome might-makes-right, government-is-good-for-you society, and still make it by the censors. Stories from Bill Gaines’ Weird Science comic books to Rod Serling’s televised Twilight Zone told us that ethical action must emerge from the individual if society is to change—and survive. Stanley Kubrick warned that our machines will be no better than ourselves in a future co-opted by commercialization. Sci-Fi films did offer a few important tips for the dystopian future fraught with human, natural, and giant lizard destruction: The safest place to survive will be in the Statue of Liberty’s extended torch (from Planet of the Apes through A.I., by way of The Day After Tomorrow and Cloverfield). And you probably don’t want to eat the Soylent Green.

The wonderful intellectual fertile fields of the “alternative cinema” of the ‘70s and ‘80s made us confront thought and images that had had no place on studio sets. In confronting neo-realistic social disparities we had to confront ourselves. Sam Peckinpah (The Wild Bunch, Straw Dogs) made us measure the violence inherent not only in society, but inside each of us. There was no utopian life for Easy Rider’s Wyatt and Billy at the end of a road trip fueled by drug profits. Caught between a world of double-speak politics and street slavery prostitution, how could Taxi Driver Travis Bickle be anything but the 20th Century’s greatest anti-hero? Existentialism rules!

Oh sure, I’ve left a lot of things out. Many of them are contradictory and should give us pause to contemplate our generation’s communal ethical responsibility. The Sex, Drugs & Rock ‘N’ Roll prescription turned into STDs, AIDS, a crack and meth epidemic, and an industrial empire of misogyny rumbling through boom boxes, base boosters, and soft-porn music videos.

Our collective social, cultural, and psychic placeholders aren’t holding their places. The ground has become spongy. Visibility is less than zero and blurred. Survey after survey that asks “Are you better off now than you were a year ago,” report that not only is the glass less than half-empty, we’re not even sure what’s in it.

Still, we persevere, taking steps that lead a little closer to racial and gender equality—or at least understanding—and wonder drugs that extend life—and quality of life—spans. And take a look at who still fills stadiums with that unadulterated back-beat: Springsteen, the Stones, U2, Paul McCartney—the senior citizens of rock ‘n’ roll.

And there’s still learning going on. Technology in education in many ways is just about old wine in new bottles. What we learn in the slipstream of media—those messages forced and reinforced from music, television (whatever the platform), video games, “social” media (WTF?) have a much greater half-life of influencing who—and what—we are or become.

From the dawn of the atomic age and its publicly promoted fears to our nightmarish times of terror that are becoming increasingly personalized, it’s still valuable to know how to Duck and Cover. It’s equally valuable to know when to stand up and be counted.