How "Wordnappers" Are Killing Original Thought 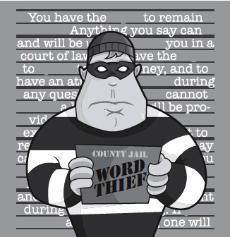 Imagine a world where everybody-from cradle to grave-wears nothing but variations of charcoal gray suits with black tasseled loafers. They keep their hair cut in precise ear-length straight bobs. Rain or shine, daily, each citizen (regardless of age or gender) breaks the monotony of the mouse-toned ensemble with a one-inch-wide eggshell-white headband, which has replaced all other accessories. Motorists drive tan, two-door hybrids. All restaurants are Taco Bell. Every store is a Wally World, and no one understands the lame joke about two kinds of music, country and western, because now only one performer, say, Sting or Rosemary Clooney, entertains the masses. In fact, just a lone song (such as "Be Still My Beating Heart" or "Swinging On A Star") remains. Folks listen to that sole all-purpose tune and its lyrics to celebrate birthdays, promotions, pass the time or mourn the death of loved ones.

Most of us shudder at the thought of living in such a community, a place where conformity trumps originality and eliminates choices. Yet, editors, educators, and essayists warn that plagiarism threatens the marketplace of ideas.1 (Of course, the topic of stolen words frequently anesthetizes students just as effectively as any sedative.) To terrorize their charges into compliance with fair usage rules and basic decency, teachers at all levels of education invoke sacred mantras and tell colorful tales of doom and gloom.

"Cheaters stagnate like mud puddles! They are doomed to a future no brighter than serving as mosquito condos!" warns an earnest professor too entranced with mixed metaphors to notice the salvia dripping from the students' mouths or their glazed eyes.

"Word thieves live lies that catch up with them eventually," the incensed crusader shouts. "Consider the boy who spent the grocery money on candy and thought he was smart when he dug up some corpse's liver at the cemetery to give to his mom to cook for their supper. That very evening, a phantom appeared before his bedroom window moaning, 'Give me back my liver, or I will take yours!' And so the crafty liver snatcher learned too late the price of purloined organs! Similarly, intellectual robbers rue their mistake when they get a mark on their permanent record or are expelled from the university."

This facetious homily about plagiarism illuminates a basic problem: How can educators meaningfully sound the alert against verbal larceny without lapsing into shrillness or flamboyant parables? I learned "Where's My Liver?" from kids in the neighborhood who lived on my block along Broad Street in McFarland, Wisconsin, a long time ago. (Come to think about it, liver isn't on nearly as many family menus as it was when I was growing up. I wonder why...) We loved to repeat, act out, and embellish the ghoulish plot. Besides several variations of the stolen-liver tale, a Google search recently turned up a "Rabbi's Wife Mystery" in which a murderer nabs a platter of chopped liver shaped like the state of Texas and replaces it with parts of a cadaver.2

Although I did not rely on any source beyond my memories to recount the folktale about the consequences of selfishness and outlandish stealing, I still looked for published versions for several reasons. In the first place, corroborating information empowers readers to pursue the subject and acknowledges those who have formalized the circulating legend. Moreover, relating my recollection to formal works increases my credibility as an original thinker who strives to find the roots of ideas.

In contrast to the playful illustrations offered so far in this commentary, scholars have conducted serious inquiries into plagiarism. For example, a Chronicle of Higher Education essayist pondered generational differences in perceptions of cheating and concluded that many freshmen grew accustomed to downloading copyrighted music free from the Napster Web site and simply copying artwork off the Internet into their blogs with no attribution and without hesitation. "Appropriating other people's ideas seems an established cultural norm."3

If the Chronicle writer is correct, the convenience of borrowing other people's art, ideas, and words eventually could prevent folks from engaging in any original thinking or creativity. Instead of solving problems creatively to best fit situations, individuals will Google their way out of jams and, therein, lose opportunities to develop their critical thinking skills.

Over time, innovation would vanish. The adage that history repeats itself will become a death knell for the imagination. Instead of vibrant insights and new strategies for resolving social, economic, or political crises, everybody will dredge up past, pre-packaged approaches readily available with the click of a mouse. The computer will shift from a tool that inspires humans to explore new worlds to an intellectual prison that confines thinking to past ruts.

Thus plagiarism-intellectual looting-diminishes citizens and democracy. Ironically the same Internet that facilitates plagiarism in newsrooms almost guarantees those breaches of honor will be exposed. When reporters are caught stealing from one another, they lose credibility; and the public's distrust endangers journalists' ability to perform their classic function of serving as the watchdog over power wielders and brokers. Across time from founding father and later president of the United States Thomas Jefferson to 21st-century New York attorney, novelist, and essayist Andrew Vachss, thinkers have defended the press as the Fourth Estate guardian of truth that exists (ideally) to serve the public.4

"Journalism is the protection between people and any sort of totalitarian rule," Vachss concluded. "That's why my hero, admittedly a flawed one, is a journalist. Journalism is what maintains democracy. It's the force for progressive social change."5

But, if reporters plagiarize, they claim another's words as their own; moreover, their lies magnify the loss of independent thought and perspectives from multiple sources vital to a marketplace of ideas. Eventually, the world shrinks until choice evaporates, and not only are all restaurants Taco Bell, but all minds are closed to new possibilities.

Ultimately, plagiarism kills original thinking and erodes the freedom of expression essential to democracy. At least, that's my opinion.


Notes
1 Some articles that journalists and scholars have written about plagiarism's impact on journalism and culture are: Roy Peter Clark, "The Unoriginal Sin," originally published in the March 1983 issue of the Washington Journalism Review; reprinted in Poynter.org in July 2000. [Accessed 19 February 2010]; Norman P. Lewis, "Plagiarism Antecedents and Situational Influences," Journalism and Mass Communication Quarterly, 85:2 (Summer 2008); Jill Rosen, "All About the Retrospect," American Journalism Review, June 2003 [Accessed 24 November 2009 at http://www.ajr.org/ Article.asp?id=3020] [copyright 2009]; "Universities Simply Have to Do Better," Maclean's 120:5 (2 December 2007); Robert Niles, "Protecting Your Business by Fighting Plagiarism Online: Interview with Jonathan Bailey, founder and editor of Plagiarism Today," Online Journalism Review, 20 June 2006 [Accessed 19 February 2010 at http://www.ojr.org/ojr/stories/060620niles/]; Steffan Postaer, "No Longer Smiling: It Appears My Favorite Commercial of the Year Was Plagiarized," Gods of Advertising blog (5 January 2010) [Accessed 8 March 2010 at http://godsofadvertising.wordpress.com/2010/01/05/no-longer-smiling-my-favorite-commercial-of-the-year-appears-was-plagiarized.]; Megan Garber, "The Public Editor and the Internet: The Match Game! Clark Hoyt Builds Up the Case of The Times v. The Bloggers," in "Behind the News," Columbia Journalism Review, 26 May 2009 [Accessed 24 November 2009]; and Karla Gower, "Truth and Transparency," in Kathy Fitzpatrick and Carolyn Bronstein, Ethics in Public Relations: Responsible Advocacy (Thousand Oaks, CA: Sage, 2006).

2 Sharon Kahn, Which Big Giver Stole the Chopped Liver? (New York: Penguin, 2004). The A Ruby the Rabbi's Wife Mystery series includes Fax Me a Bagel: A Novel Introducing Ruby, the Rabbi's Wife (1998); Never Nosh a Matzo Ball (2000); Don't Cry for Me, Hot Pastrami (2001); Hold the Cream Cheese, Kill the Lox (2002); and Out of the Frying Pan, into the Choir (2006). Online, at Unsolved Mysteries, author 3901 posted a more elaborate version of the story about the boy who buys candy with the grocery money. This author's tale is more plausible than the one we told as children because the boy steals the liver from a cadaver immediately after the funeral. In our story, the kid dug deep down into the ground to fetch the replacement. Although our story was not as credible, we still liked it. See: http://www.unsolvedmysteries.com/usm464109.html. At Classic Ghost Stories, http://www.castleofspirits.com/liver.html, a wife takes revenge on her abusive husband, George, by first feeding him liver stolen from a fresh cadaver and then telling the avenging zombie that he, not she, "has" the liver. That version from "Carrie in Arizona" ends with George's screams. Classic Ghosts offers a spin-off in which a husband breaks his promise to let his wife take her golden arm with her to the grave. He robs the corpse in the middle of night after the funeral. The enraged ghost demands her arm, but the greedy man clings to it under the covers, and so she kills him. In 1996, Tim Jennings copyrighted a quite different and more detailed version than mine with Eastern Coyote Productions, available at http://www.folktale.net/ liver.html.

3 M. Garrett Bauman, "Observer: CSI: Plagiarism," The Chronicle Review, A Weekly Magazine of Ideas, The Chronicle of Higher Education, Section B, 9 October 2009, B20. Bauman concludes that using Napster and acquiring images for blogs conditions students to accept theft as normal.

4 In a letter from Paris to Edward Carrington, Thomas Jefferson, who was serving as the U. S. Minister to France, explained in 1787 that as long as all men could read, he believed newspapers offered the best defense against government abuses. He said only an informed citizenry would prevent politicians from reverting into wolves and devouring the public. Jefferson had chosen Carrington to represent Virginia in the Continental Congress from 1786 to 1788, according to The Forum at the Online Library of Liberty, which has an extensive collection of Jefferson's papers. See: http://oll.libertyfund.org/?option= com_staticxt&staticfile=full_quote.php%3Fquote=302&Itemid=275.

5 Andrew Vachss's Web page at http://www.vachss.com/index.html contains his official biography, bibliography, and interviews. The quotations about journalism and democracy appear at www.brainyquotes.com/quotes/authors/a/andrew_vachss.html.

Paulette Kilmer is on the faculty of the University of Toledo, Ohio. She may be reached at This email address is being protected from spambots. You need JavaScript enabled to view it..