John C. Merrill was the most prolific—and arguably the best—author media ethics magazine has ever published. He was able to provide commentary, ideas and arguments on everything that interests the magazine (and its editor). In just the past dozen years he contributed more than a dozen articles and, in the notification I received from his wife, Dorothy, of John's death, she reported that, in his final days, "He wanted to answer your last call for papers. He said he couldn’t write anything, but he thought he could find something he had written and polish it up."

John Merrill was a Renaissance Man. He always reminded me of the subject of the appreciation uttered by President John F. Kennedy to his guests when he looked around at an extraordinarily distinguished White House gathering and opined that this was certainly the most erudite assembly in the White House—since the last time Thomas Jefferson dined there alone. The only difference is that John Merrill liked the company of others. Everyone could be his student, his colleague, his friend, or his sparring partner.

During John’s lifetime, he contributed to the field of journalism/ethics/philosophy books by the dozens and articles by the hundreds.  Throughout, he also educated thousands of students at every level and with varied backgrounds who arrived to learn from John at many institutions of higher learning (particularly the University of Missouri and Louisiana State University), and conferences here, there, and everywhere, over a lectern, a convivial table, or the carcass of a dethroned paradigm—drawing upon his zest for philosophic scholarship, his journalistic skills, and his concern for creating a better world.

To some, John was "the guy who keeps writing about Machiavelli."  But even a short acquaintanceship with John would unlock ideas upon ideas that go well beyond his libertarian interests in freedom.  To me, being exposed to John’s free-ranging thought made life much more interesting and enjoyable. My own connection with John was professionally intense, but didn’t cover as many years as many of those who studied under him—but it was always stimulating to exchange puns and trivia at meetings of the Association for Education in Journalism and Mass Communication, argue over obscure points in history, learn from him at one of the "Ethics Seminars" he organized and taught so well at Missouri and elsewhere, and discuss articles he wrote and I insisted on editing (a task which both of us truly appreciated).  John believed that ideas needed honing, and never objected to firing (or receiving) a torpedo at an idea. (His equanimity in the face of such attacks might be due to the fact that, during Navy duty in World War II, his ship actually was torpedoed by the German U-130 and he was rescued off North Africa by the passing battleship New York.)

As we take from the bookshelves any of the many books with John's name on the spine, or come upon an article, essay or mention of his ideas, or even just remember his leonine visage surrounded by a horde of eager learners, I hope we think of the living, joking, caring John Merrill.  In a 2007 Festschrift (Freedom Fighter) edited by Donald W. Hatley and Paula F. Furr, the cover shows a young John Merrill wading ashore from a shrimp boat in the Gulf of Mexico.  I always joked to John that the combination of lens and light made it look as though he were walking on water, rather than in it.  Now I’m not so sure that I was joking.

Goodbye John.  We all will miss your solid scholarship, your sense of humor, your ability to criticize and accept criticism, your love of family and colleagues, your unstinted praise, and above all your ability to make intellectual connections that moved the frontiers forward. 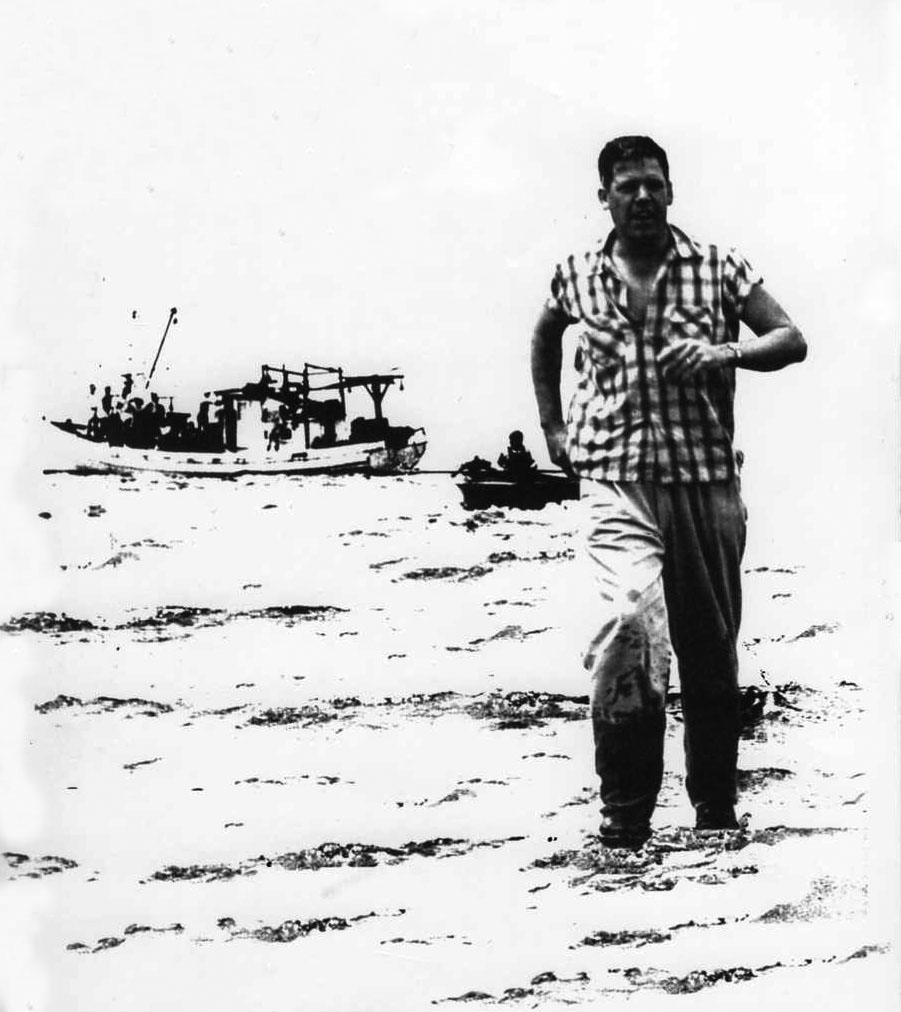 In this special section of Media Ethics, prepared a month after John Merrill's untimely death, in addition to paying tribute, we want to make it easier for our readers to reflect on what John has meant and will mean in the future.  Within this section there are:

A new essay by Clifford Christians, "John Merrill: Philosopher," that reminds us (among other things) of the unfinished discussions comparing John’s "imperative of freedom" and Cliff's "imperative of responsibility."

An appreciation written since John's passing by Peter Gade and A. David Gordon, "John Calhoun Merrill: A Legacy of Wisdom," that reviews the amazing record in myriad areas that John Merrill racked up since the start of the 21st century.

A listing of the works and activities of "John C. Merrill in the 21st Century.

One of Media Ethics' "On the Shoulders of Giants" articles from a dozen years ago, in which Dave Gordon explored what John Merrill had already given to the strange and wonderful field of journalism and ethics.

And—because John has always been his own best spokesman—a recent piece by Merrill himself, "Some Questions without Answers and Answers without Questions," originally published in Controversies in Media Ethics (3rd ed.) last year.

These are but a small sampling of what could be published to memorialize John Merrill. We are sure that there are literally hundreds of additional tributes and reflections that we could have presented here.  We hope that those who would gladly have submitted something to Media Ethics about John Calhoun Merrill will, instead, work on something that John would have wanted to do and transmit it, as John would have, to other generations:  in the newsroom, the classroom, or the bookshelf.